After a few interesting turns and diversions in the story of Vincenzo and his murder mystery, I am excited to get back to his story, which sadly, is a short tale of his life in America. In the last post about Vincenzo I shared the passenger record for his voyage here. He arrived in June of 1903 along with fellow Appulian cousin’s. Traveling with him was Francesco Mitorotondo, Francesco Tetro, Angelo D’Armiento, Jacobelli (?) Tommasco, Leonardo Searolo, and Francesco Civitano (18) *note: this Francesco Civitano was the son of Vitobino Luigi – brother to great grandfather Vincenzo (of this post). Francesco was his nephew and would go on to marry Rosina D’Armiento. As mentioned in the previous post most of them were traveling to their shared cousin Luigi Mitorotondo, address listed as 319 Broome St. I believe (below) is the building on Broome St, in from the corner building, the one with the green fire escape, next to the smaller white building. Notice the cobble stone street too, love the cobblestones. Could this be the original building from the 1900’s? (I don’t have the date this Google earth photo was taken) 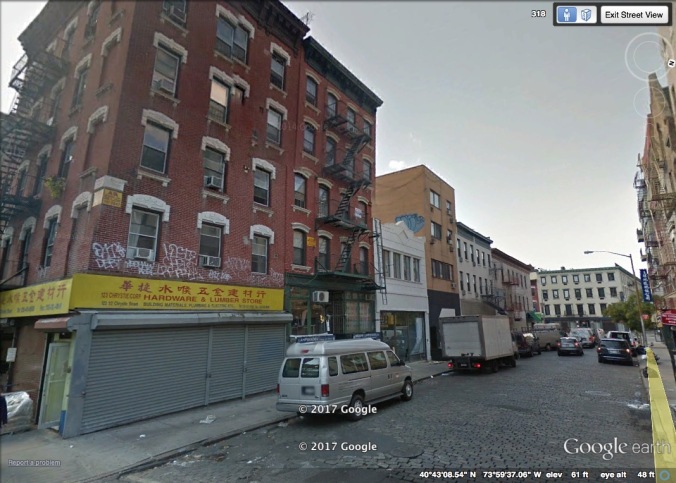 Continuing to recap on March 1, 1902 (in Grumo Appula) Nicoletta and Vincenzo welcomed their first daughter Giuditta but their happiness was short lived when she passed away at 9 months old on the 20th of Dec 1902.  Later Nicoletta gave birth to another baby girl, also named Giuditta on Oct 8th, 1903, 4 months after Vincenzo had set sail for America. Alone, with out her husband, their happiness once again was overshadowed in sadness when Giuditta #2 passed away on the 7th of Nov. 1904.  I believe Nicoletta endured the sadness and grief of losing her second daughter with out Vincenzo by her side. In a future census record the immigration year was stated as 1906. Coupled with the fact that their son Francesco would be born in 1907 here in New York, I believe the 1906 immigration date is most likely correct. Sometime after the arrival of Nicoletta they moved to their own apt; below. 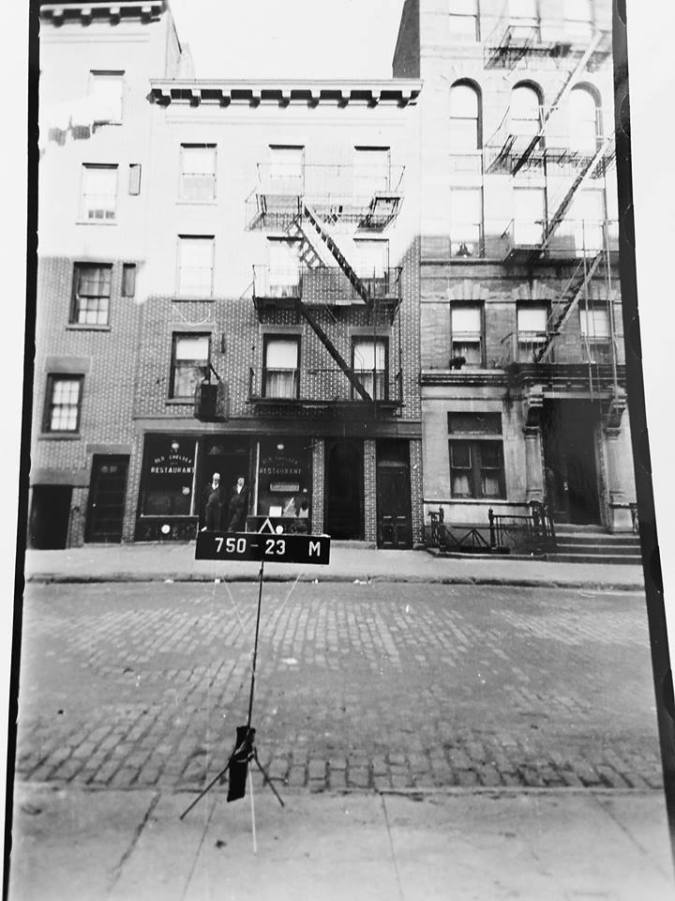 My Great Grandfather Vincenzo Civitano and his son, my Grandfather Francesco c. 1909 shortly before his death. 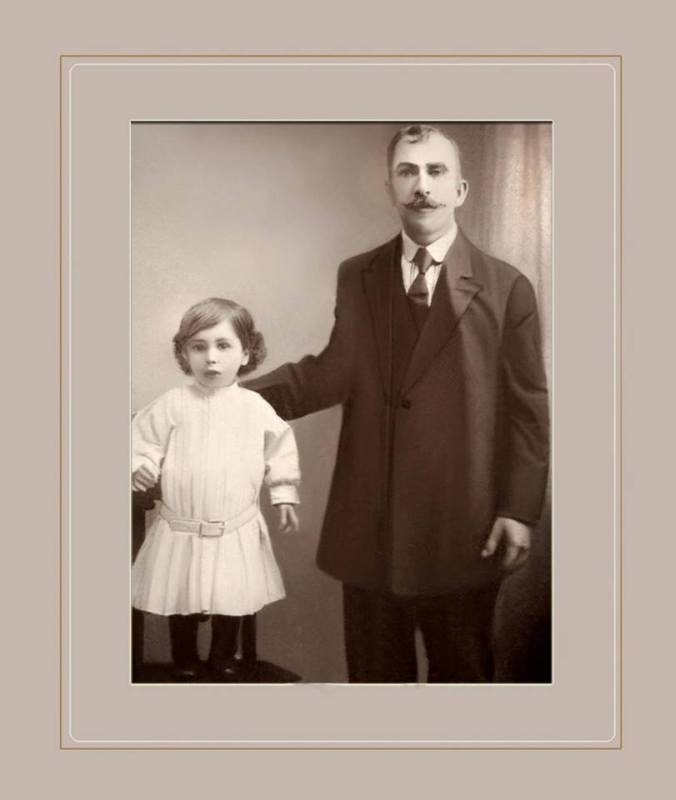 On July 18, 1909 Vincenzo and Nicoletta welcomed their 2 child, daughter Giuditta/Julia but once again Nicoletta would faced unbelievable horror and grief as her joy of welcoming baby Giuditta was shattered

Vincenzo on the 12 of October 1909 -was brutally stabbed to death.

Family lore is that it happened over a business dispute. What little we know is that there was a trial, that the assailant was found guilty and was sent to prison. Also the story continues: Nicoletta wanted to return to her home and family in Italy but before she could go she had to remain to testify at the trial. What we do know for sure is that sometime after that dreadful day and before April of 1910 Giuditta moved to 250 W 29th St. and joined the family of her husband’s 1st cousin, her daughters name sake, Giuditta and brother-in-law Vito Simone with their 2 children Mary 2 years and Rocco 9/12 months. Their ages are the  exact ages listed  for Francesco and yes – baby Giuditta. Brother-in-law Vito’s profession is listed as coal and wood man and our poor Nicoletta is listed as a coal and wood employee. She has lost 2 children and she has just lost her husband. She has lost her new apartment home and she must go to work. I can’t even begin to imagine her thoughts at the time. Another very interesting detail is listed too. Under the heading ‘mother and number of children’ it now says ‘number born’ 6; ‘number living’ 2. Had Nicoletta been pregnant again and in her grief and sorrow lost her 3rd and a 4th child, had she lost one prior to Vincenzo’s death and then another by working or was this only a clerical error on the census?  Nicoletta does return to Italy, and for now we believe after testifying at the trial. And here the story rests for many years – well over 100 years.

The questions for me now became where was Vincenzo buried? Calvary Cemetery was what my Uncle Joseph had told me but Calvary had no record for him and Joseph had never been to see him with or without his father. And who murdered Vincenzo? No one seemed to know? What was the argument over really? Something perhaps over delivery routes?  The incident was rarely talked about and for those of us still alive to remember they do not remember. Another interesting part to the story is this: My grandfather Francesco now know as Frank returned to New York (from Italy where he was living with his mother, sister and 2nd husband) as a young man to avenge his father’s death. (I will detail this in a later post)

The story does continue 100 years later as I began to probe and prod my Uncle Joseph for details. This was his grandfather and Frank who returned from Italy to avenge his fathers death, was his father. I could not let this story just rest nor could I allow the memory of my great grandfather Vincenzo to just fade into a fairytale or become just another lost Italian immigrant of little importance in history. It was our history and incredibly important to know the details and honor his memory. The details of his death were becoming a fairytale and the few details left were being doubted. Enter the incredible sleuthing talents of my cousin Peter Marino. This tale began to haunt us both and while I fell short in locating any documents Peter slipped into his Sherlock cap and slowly the details and events of Vincenzo’s death were revealed. 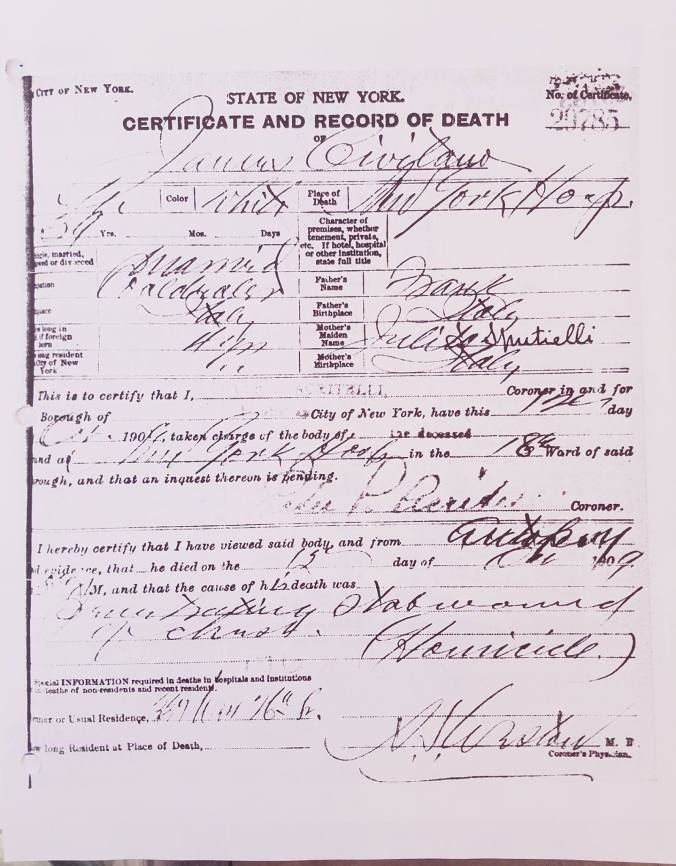 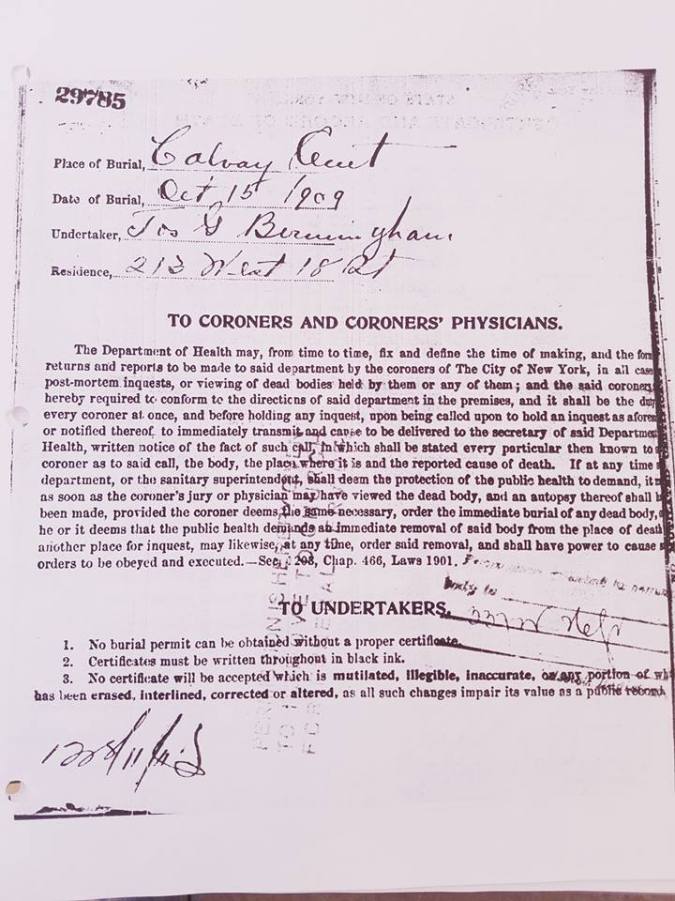 Peter first located the death certificate. Note that his name is listed as James and the Civitano while it does look like the t is crossed it was listed as an L for Civilano. You can barely make out ‘married’ and ‘coal dealer’ but it is clear that it says ‘stab wound to chest’  ‘homicide’ The next document is from the Coroner’s office. It appears the case was received by the District Attorney on Dec 8th 1909 case # 4991 with Vincenzo’s name recorded properly. 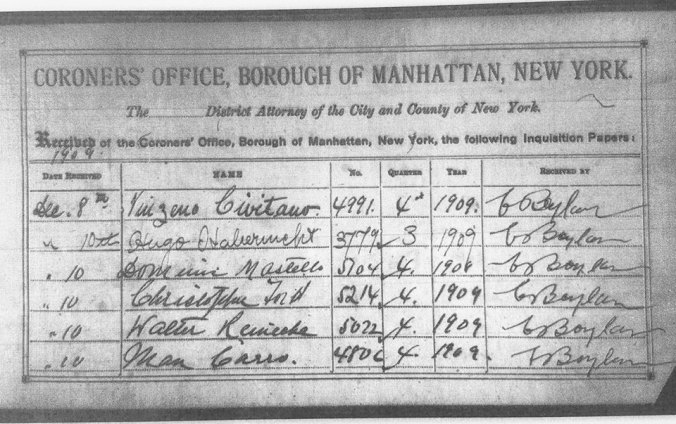 There are very few words to express the feelings felt with finding these records finally. It was a long persistent painstaking and disappointing process with all of the credit and accolades going to Peter. But as if that wasn’t enough, Peter contacted Calvary Cemetery, located Vincenzo’s grave in the paupers section and then had this temporary gravestone marker mounted in place. 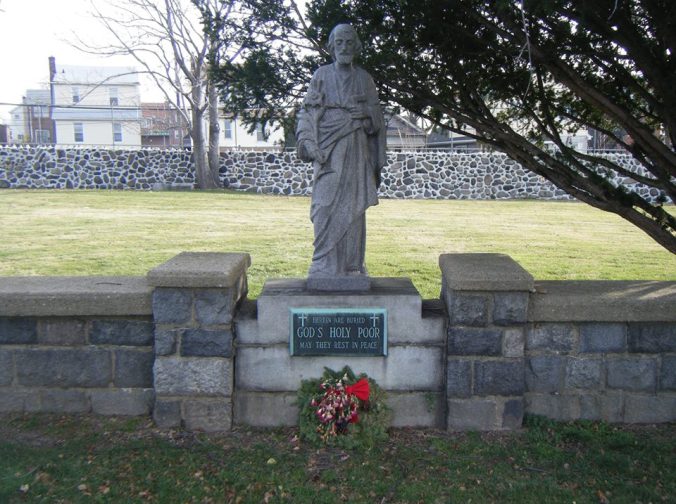 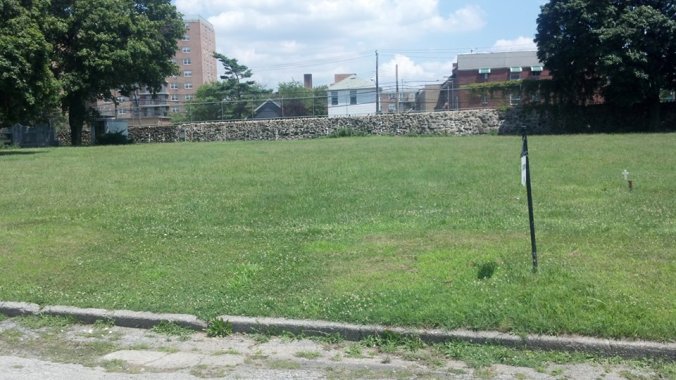 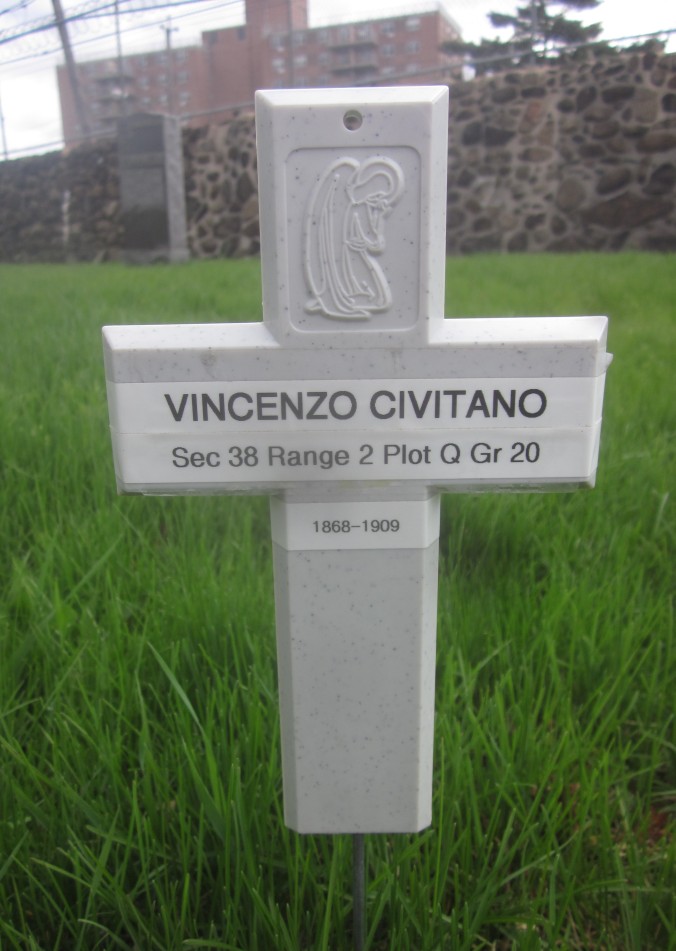 The next question continued to play in the back of my mind for the next couple of years which was “who murdered Vincenzo?” Surely if there had been a trial, surely if Nicoletta had to remain in New York to testify and the assailant went to prison, surely there had to be a record of the trail. But we, Peter nor I could find any record. We had revisited this question, this mystery quite a few times with no progress but a few weeks ago I woke with the idea to search google for New York district attorney trails 1909 – something like that. Its funny how obvious a search question could be but it never occurred to me. I was excited to find from the

New York City Department of Records: Municipal Archives “District Attorney Records, 1895-1971 Closed case files, docket books, newspaper clippings, investigations, correspondence. The Municipal Archives holdings of records created by the District Attorneys of the five counties are closely related to (and often identical to), many of the criminal court series. The New York County District Attorney collection is the most extensive. It consists of closed case files, from 1895 through 1980 and the related “record of cases,” a.k.a. docket books which serve as a name index to the closed cases.”

Of course I sent out an email immediately asking for information, direction in moving forward in locating any court documents and the name of the assailant in this case. Nothing is online and they do not do any research for you. It is all in person. The archivist returning my query has been extremely helpful so far and did say he would do a preliminary search for me and see what he could uncover. I am hoping to hear back from him soon. In the mean time I contacted Peter aka Sherlock and my Uncle Joe. I am cautiously hopeful that we many have the answer very soon to ‘Who killed Vincenzo Civitano?’

2 thoughts on “Who Killed Vincenzo Civitano? My Great Grandfather continued.”