I have been spending a considerable amount of time with the Marvulli family lately. Much of it prompted by recent connections to family members from this branch. I have been blessed with cousins commenting and sharing stories and photos helping to give us a well rounded glimpse into the lives of our ancestors.

Yesterday, I had a very unusual but wonderful email a man named Giovanni D’Amato from Brooklyn. Giovanni wrote

Hello,
My name is Giovanni D’Amato. I want to let you know that earlier today August 22, 2020 I went for a jog through the cemetery from my home in Williamsburg, Brooklyn. A particular grave stone caught my eye…I don’t know why, but it just did. It was the grave stone of Graziella Marvulli. I had brought with me flowers that I intended to bring to the chapel but I felt captivated by the stone and photo of Grace. I left the flower at the tombstone. I then got home and googled the name and your family blog popped up.

After a brief exchange of emails, he shared the photo with me and gave me permission to post it.

What a blessing and I couldn’t be more thankful to Giovanni and pleased to be able to share this with you.

Giovanni also shared he is a first generation, his family only arriving in 1973. He also pointed out that the stone was in Italian. Something I may not have initially have noticed or ignored. The stone reads:

Grazia and John married in 1901 in Grumo Appula. Their first son, Dominick was born in Grumo in 1902. Grazia immigrated in 1905 under her maiden name of Scarola, joining her husband who had arrived in 1903. Their 2nd son Rocco was born in 1906, followed by Giuseppe born 1907 – who passed away in 1909. Their only daughter Rosa was born in 1908 and last son Joseph was born in 1909. Sadly, seven years after Joseph’s birth Grazia passed away.

Most recently I have had the great pleasure in hearing from and connecting with the daughter of Thomas, son of John and Maria. She shared with me this wonderful photo.

John Marvulli in the middle, Thomas on the right, the other two unknown at this time. I suspect the other male is one of Johns sons and a granddaughter. Any help in identifying them is always welcomed.

You may remember from other postings this wonderful photo of John with his two sisters, Angelina and Nicoletta (my great grandmother) 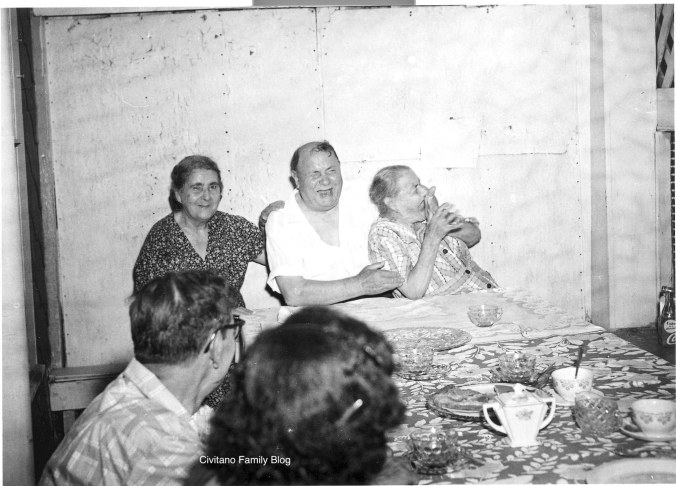 Nicoletta, John and Angelina ~ A priceless photo of the love and laughter with a little help of homemade wine. 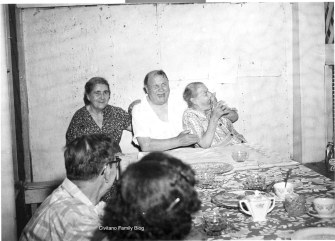 Again, most recently, Guy Caso shared this wonderful photo of Michele Caso, son of Rita Marvulli – sister of those three laughter filled siblings above. (the back of Michele’s head is visible in the above photo.

Photo is taken in front of his home 28th St., Astoria, Queens

A big thank you to Giovanni for contacting me and sharing his story and remembrance of sweet Grazia and placing the flowers at her grave. Thank you to all my distant cousins for helping me share our families story.

Robert G. Caso, known as Bob, was my 2nd cousin 1x removed. I never knew Bob and only recently discovered we lived within 150 miles of each other.

I wrote about Bob in a May postings of this year, highlighting his life and the fact that he played an intricate role in solving a 75 year old mystery about a missing couple in 1929 in the Port Angeles, WA area. You can access that post by clicking here Robert G. Caso ~ Solves a 75 Year Old Mystery

The Caso branch is from Grumo Appula and married into the Marvulli branch also originating in Grumo. Rita Marvulli married Gaetano Caso in 1885 immigrating by the 1900’s. (Rita was the sister to my great grandmother Nicoletta). But DeLellis and Langellotti branches please don’t feel left out as the Bob Caso’s story is as much yours  because it all started as far back as about 1760 in San Gregorio, Caserta and Grumo, Bari with Caso’s and D’Amico’s, DeLellis and Langellotti’s all mingling and marring one another.

When I had connected with a 3rd cousin, Guy Caso, he shared with me the amazing story of Bob and the role he played in finding a missing couple from 1929, WA and that a book had been written about it, I had to purchase it. Below is the cover for the book written by  Dan Pontbriand  The Missing Ones – A True Story

It is truly an amazing story about a couple with 2 young boys. The Mom had been in the hospital. Dad left them with neighbors and went to fetch Mom and bring her home, promising the boys the following day they would attend the 4th of July celebration in the near by town. They never returned and were never found. Speculation of what happened spread, searches were conducted but yielded little to no evidence and their disappearance remained a mystery. The setting is on the magnificent Olympic Peninsula within the Olympic Nat’l Park of Washington State and Lake Crescent. Dan Pontibriand weaves a detailed tale leading up to their being found, including the history of the area, the people who settled it, and one mans obsession and mission (Bob’s) to discover what happened to Blanche and Russell Warren.

In addition there are wonderful photo’s along with a few of Bob. Copyright law prevents me from sharing them but if you have any interest in delving deeper into this story, the story of one of our fellow family members, I recommend this book.

Back on May 13th of this year I posted the picture below of Giuseppe (Joseph) Marvulli and his beautiful wife Lucia and baby girl Rose. In the posting Rose was only partially visible but thank you to my cousin Toni for getting the full photo to me courtesy of Vita Andreoli nee Caso.

Look at Rose so tiny and sitting so princess like, almost floating it seems in air. I can see just a faint making of a board that must be suspended across the arms of the chair, and you can make out a strap across her chest and a hunt of the buckle.

Giuseppe/Joseph is my 2x great Uncle – brother to my great grandmother Nicoletta Marvulli.

Written on the May 13th

I can not get over the gentleness in the face of Lucia and just how beautiful she truly was. Sadly, as I have written before, Lucia passed away on the 11 June 1908, in Grumo Appula, Italy, just three years after the birth of Vera.

In this photo, Lucia is pregnant with 2nd daughter Vera/Vita. Vera was born in 1905.

The story that was shared with me was that after Lucia died Giuseppe was forced to put Rose into an orphanage as he was not able to care for both children. Lucia’s mother, Vita DiGirolamo nee Serveddio actually wet nursed her grand baby. After some time, Giuseppe, in a better position, had Rose return home.

I posted the photo on the FB page of Random Acts of Photo Restoration and this wonderful restoration of the photo was done by Jeff Lentz. I think he did a great job in removing some of the shadowing and gave it a nice crisp look.